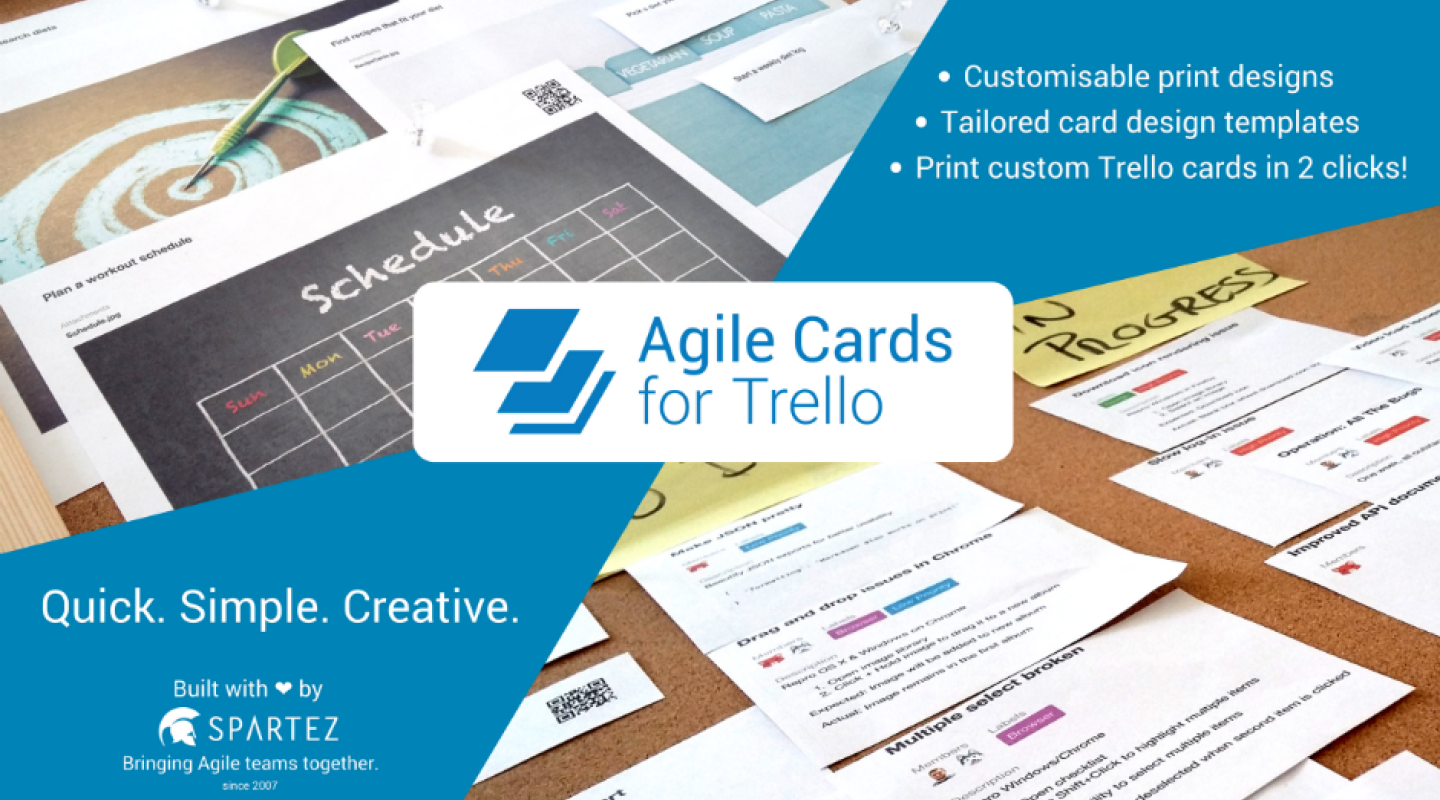 Introducing 'Agile Cards by Spartez' for Trello - The newest addition to Spartez’ ever-growing selection of Agile-orientated add-ons for third-party platforms.

Our fresh Power-Up for the Trello platform encompasses simple yet flexible options for Trello users to print out cards seamlessly from their Trello boards.

With its release, it’s also the first Power-Up we have launched for the Trello platform, which is a slight change from the platforms we have been focused on developing our existing add-ons for over the past eight years. Including Agile Cards for Jira and Agile Cards for VTS/TFS, which inspired many of the features adapted within the Trello Power-Up.

So, without further ado, let’s go over what’s possible with Agile Cards for Trello.


Watch the video below to view our Power-Up's key features -


Our Trello Power-Up is now available for all Trello users to enjoy - for free!

Want to know the full story behind our Trello Power-Up’s development? Read on.

It all began with AtlasCamp, followed by a ShipIt project and one Spartan’s dedication to see their creative idea through to fruition.

First, let’s talk about how the latest addition to Trello’s ever-growing list of Power-Ups came about with the sole Spartan behind it: Michał Nykiel.

‘Spartan’ is our moniker for anyone who works at our awesome company, Spartez.

G’day, Michal, tell us a bit about yourself and what inspired you to create Agile Cards for Trello Power-Up?

I’ve been working at Spartez for the last year and a half as a frontend web developer. My work during this time has been mainly focused on add-ons for Atlassian’s Jira and Microsoft’s TFS platforms—notably, our add-ons Agile Cards for Jira and Agile Cards for VST/TFS.

My initial interest in Trello and developing a Power-Up for the platform was sparked while I was attending AtlasCamp during the EU Atlassian Summit in Barcelona earlier this year. For the duration of the summit, there was a significant amount of attention paid to Trello during the sessions and keynotes, which I expected as Trello had been acquired by Atlassian at the start of the year. Out of all sessions I attended, it was Bentley Cook’s 'Developing Powerful Trello Power-Ups’ that really struck a chord with me and left me with the desire to explore Power-Up development further when I returned home.

So, when you got back from the Summit, how did you decide what type of Power-Up you wanted to develop?

My decision to create the Agile Cards Power-Up for Trello was a natural choice. I had seen the application of similar functionality and use cases through users of our existing add-ons for Atlassian’s Jira software and Microsoft VTS/TFS services. I had also realized the potential value this could bring to existing and new users of Trello that needed to print out their Trello boards. The native printing option provided by Trello at the time was awful and there was demand from users who wanted to print out their Trello board cards (based on my research on available browser extensions for printing Trello boards).

Ok, so once you decided to develop this particular Power-Up, when and how did you begin the development?

Well, the timing of my participation at AtlasCamp during the Atlassian summit in Barcelona couldn’t have been better. After my return home, there was only one month to wait until the next ShipIt event in our office.

ShipIt is a 24-hour hackathon hosted by Atlassian every three months. As with most hackathons, you start with an idea, you assemble a team, and you develop your idea for delivery within 24 hours—with a steady supply of coffee, pizza, and energy drinks for sustenance, of course. ShipIt is unique in that it’s global—that is, it takes place in every Atlassian office around the globe, well, at least the ones that submit ShipIt projects.

During the ShipIt in which a rudimentary version of the Agile Cards Power-Up was developed, I was a one-man team for the duration, that is, my tasks included development, delivery, and showcasing my work to the office teams here in Gdansk during the ShipIt presentation rounds at the end.

The scope for the development of this Power-Up was relatively small, so there wasn’t any need for extra hands to see it through to a working version within the 24-hour time limit. In fact, I pretty much wrapped up the dev work within 12 hours and had the remainder of the time in office the next morning, well-rested :-), to prepare a short presentation for the voting rounds.

As for the coding part, I didn’t face any real hurdles as I started out exploring some sample Power-Ups provided by Trello to benchmark the requirements and then just simply built my Power-Up from that.

In our local ShipIt scoring rounds, my project came first in the first round and fifth in the second round. I was ousted from the top-three ranking by projects delivered by my peers— Agile Retros - Retrospectives in Jira, Bamboo Pipelines, and Jira DC Monitoring Console, respectively. No cake, but it was a great experience all the same.

Granted, at the end of ShipIt, I didn’t feel satisfied with leaving the Power-Up as it was and decided I would continue developing it toward a version that was shippable for public use.

For context, the primary version of Agile Cards for Trello that I had completed for my ShipIt project was not in any way “advanced” because it only had a limited amount of customization options for printing Trello cards.

I knew it could be much better, and I decided I wanted to refine it to be more user-friendly by including options to print individual cards, all lists, specific lists, and card field selection and by offering the user a selection of predefined design templates with different layouts to provide variety and relevancy for a range of specific tasks.

With a benchmark of ideas for requirements set, I aimed to have the ‘final’ version completed by August 4 so I could submit it to Atlassian’s CodeGeist and to the Trello platform team as a Power-Up for review and approval.

Nice! So after ShipIt was over, when did you continue work on a refined version of the Agile Cards for Trello Power-Up?

Following ShipIt, I had continued work as usual on my planned sprint for Agile Cards for Jira. After the sprint was over (two weeks later), I took one week of 20% time to work on improvements for the Power-Up. It was great that I could work on it self-paced and, at the same time, demo it and collect constructive feedback from the Spartez team. By the end of the week, I had a version I was happy with and submitted it for CodeGeist and to the Trello platform team for review.

The platform team from Trello was really quick to respond to my request and helped me out with a slight bug, which we fixed with a code snippet provided by the platform team. About a week later, I got the greenlight from Trello’s platform team: my Power-Up was approved for listing. (Yay!)

Awesome! So, last question. What’s your next plan of action now that you have your Power-Up released on Trello?

Well, to be honest, I’m just going to play it by ear, see how Trello users receive it, and collect their feedback to drive any future improvements and additions. I created a dedicated Trello board for users of the Power-Up to submit their feedback here: Agile Cards Trello feedback board.

Any feedback is welcomed!